A Conversation with Jill Abramson

Original publication on Feb 5, 2015 in the New York Women in Communications Aloud Blog

On Jan. 30, 2015, NYWICI hosted Reinvention: The Art of Coming Out on Top, a one-on-one interview with the former managing editor of the New York Times, Jill Abramson, conducted by NBC News’ Weekend Today anchor Erica Hill. 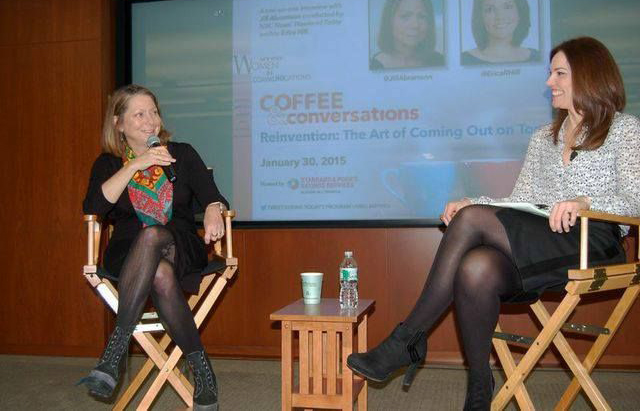 Here are a few highlights.

On Leaving the New York Times

When Jill Abramson was fired in 2014, she experienced a sudden, surreal shift from covering the news to being the news. “The loudness of the coverage was surprising. It was unfamiliar to me to be the subject of a media feeding frenzy.”

“I walked out of the building and said to myself, ‘Jill, what are you feeling?’ I didn’t feel nervous, I didn’t feel like crying. I felt relieved. I didn’t feel that unhappy about it. I felt an overwhelming sense of relief.” Jill believes that her firing “was not a feminist issue,” but that there were gender issues, and she stresses that it would be dishonest of her to say that she has been a victim.

The lesson she learned from the media scrutiny that followed was a simple one: embrace being fired and accept that it’s OK to talk about it.

Jill still worships the Times (which she reads exclusively digitally). “Despite the bloody ending, I love The New York Times. If it somehow went away, it could never be built again.”

Re-invention is for people who want to step off the track and develop an inner talent; it is a very high class problem. “The luxury of reinvention is just not there for most women. But for women who do have a bit of financial security, [my advice is] to make sure you have the resources to tough it out. Because it’s tough out there, and it’s much easier for men to raise money for start-ups than women.”

How does Jill define herself today? “I am a 60-year-old woman, a lecturer at Harvard, who is teaching writing to some of the brightest students on the planet at the other institution that I worship besides the New York Times, so lucky am I!

“I was a classic case of someone who was just so happy to get the job that I never even negotiated my pay or asked if I was making as much as my male counterparts. Don’t wait until you have a grievance to bring up your pay! Don’t suffer in silence!”

Pay negotiations should be calm and matter-of-fact and part of the deal. But too few women step forward. “In my managing editor’s role, I can think of maybe 5 cases where any women came to me to negotiate.” Jill’s advice: “Don’t wait until you have a grievance. Bring it up as a matter-of-fact thing. But when you do have a grievance, it becomes an emotional thing — so do it. I would encourage you to pursue your dream.”

The coverage of her ouster underscored a broader trend in journalism. “The media love controversy. And often, they don’t bother to tell you what the controversy is over. Controversy is “heroin to reporters.”

The constant flow of information is shaping the news: “We have so much information, we can’t store it all. There’s a difference between information and knowledge. To be more knowledgeable, tear yourself away from the Internet and read some books. That’s a good place to start.”

Jill is setting out on a new venture, and says she wants to devote the time she has left in her career “to reporting and telling great stories.”

She’s working on a digital start-up project with Steve Brill to develop long-form journalism, “longer than a New Yorker article but shorter than a book, the nonfiction equivalent of a novella.” They plan on charging for content and vow to “deliver the goods”: journalism worth paying for.